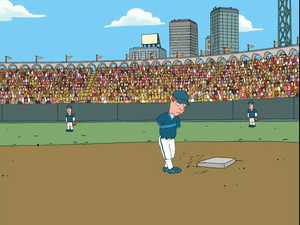 Bucky LaGrange is a no-armed baseball player in "Movin' Out (Brian's Song)". Although he has no hits and a remarkable string of errors, he is still in the major leagues, which the announcers are astounded by.

In the episode commentary, Seth MacFarlane reported the inspiration for Bucky was one-armed Pete Gray who had much better luck on the diamond. To the amazement of his teammates and the park's fans alike, Gray picked up his first hit, a single to center field, in just his second at bat. A month later, the one-armed outfielder lived out his boyhood dream when the Browns traveled to New York to play the Yankees. The Browns swept the Yankees in the three game set, and Gray played a major role in his team's victory, picking up five hits and two RBI in the series. However, the end of World War II saw returning players with two arms and forced Gray out of the major leagues.

Retrieved from "https://familyguy.fandom.com/wiki/Bucky_LaGrange?oldid=216696"
Community content is available under CC-BY-SA unless otherwise noted.