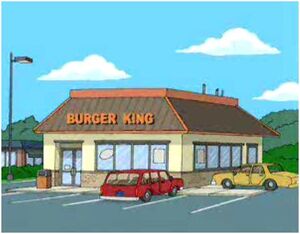 In "Deep Throats", Peter Griffin was an employee singing "Ding! Fries are Done!".

Peter, his mother Thelma Griffin, and her then-boyfriend Tom Tucker went to a Burger King in "Mother Tucker". The cashier thought Peter, who was going through a childish behavior stage with a fatherly figure now present, was adorable.

It's also mentioned in "Road to Rupert" when Peter points out that he doesn't go there to tell Lois what to do when she criticizes his building a ramp to jump cars.

In "Cool Hand Peter", it's parodied as Burger Queen. Likewise, the Whopper sandwich is parodied as a "Flame-Broiled Bopper".

While Peter is explaining that the network prefers fake names for products in "You Can't Handle the Booth!", the restaurant is referred to as 'Burger Kong.'

Peter mentions Burger King as part of his act as an 'all set-up, no punchline' comedian in "Disney's The Reboot".

While making a kickstarter film in "Start Me Up", Brian thanks Chris for his scouting of a Burger King. After a delay, during which Brian has proceeded to read the script, Chris laughs and notes that he does like Burger King.

Retrieved from "https://familyguy.fandom.com/wiki/Burger_King?oldid=223708"
Community content is available under CC-BY-SA unless otherwise noted.