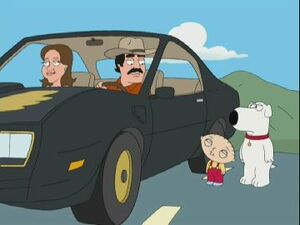 Burton Leon "Burt" Reynolds, Jr. (February 11, 1936 - September 6, 2018) was an American actor notable for his work in Deliverance, The Longest Yard and its remake, the Smokey and the Bandit series, the first two Cannonball Run films, and All Dogs Go to Heaven.

He appears as Bandit from the film Smokey and the Bandit in "Road to Rupert" with co-star Sally Field.

Olivia Fuller mentions that she and the host of a birthday party that Brian and Stewie perform at in "The Boys in the Band" attended the same acting camp operated by Burt Reynolds.