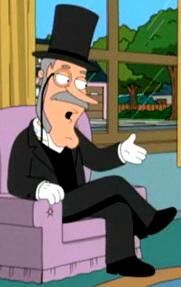 Buzz Killington is a well-dressed British man from the late 19th century. His name is a play on the term "buzz-kill." He is what one would imagine to be "cool" in late 19th-century times, but is a complete and utter buzzkill by modern standards; hence his name, and whence the humor surrounding him derives. The one who mentions how much of a buzzkill he is groans, lifts his glasses and rubs his eyes as if he has a migraine, at the end of each of Buzz's jokes.

In "Whistle While Your Wife Works," he takes away the joy from a drinking party Peter Griffin also attended. Killington initiated a series of inkblot drawing discussions.

In "Believe It or Not, Joe's Walking on Air," he is a candidate to replace the now-able walking Joe Swanson in the group of friends that also has Peter, Glenn Quagmire, and Cleveland Brown.

In "The Man with Two Brians," Stewie compares New Brian to Buzz.

He is voiced by Danny Smith.