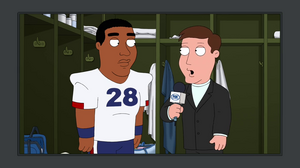 Clifford "C. J." Spiller, Jr. (born August 5, 1987) is an American football running back in the National Football League (NFL). He played college football for Clemson University and was recognized as an All-American. He began his professional career with the Buffalo Bills after placing #9 on the 2010 NFL Draft.

Spiller provides his own voice in "3 Acts of God" when he credits God in a postgame interview as part of the reason the Bills beat the New England Patriots.

Retrieved from "https://familyguy.fandom.com/wiki/C.J._Spiller?oldid=229969"
Community content is available under CC-BY-SA unless otherwise noted.