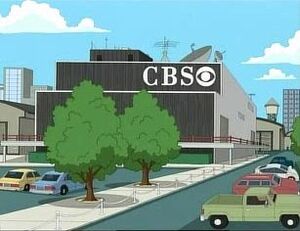 Peter Griffin uses a homemade TV set belt to watch CBS before briefly switching to NBC in "I Never Met the Dead Man".

Their slogan as of "A Picture's Worth a Thousand Bucks" is "Why watch what everyone else is watching?".

CBS has an Asiantown affiliate in "Breaking Out is Hard to Do" and the long-running 60 Minutes news show is parodied as 60 Minutes After Dark in "Death Is a Bitch".

Before meeting Joan in "I Take Thee Quagmire", Glenn Quagmire was not a fan of CBS. After meeting her, he became a fan of Without a Trace.

In "Brian Griffin's House of Payne", Brian pitches his pilot for a potential drama called What I Learned on Jefferson Street to CBS after Lois enjoys reading it. Elijah Wood auditions for the role of Byron, and the reading goes well, but the executives bring in James Woods and turn the pilot into a comedy called Class Holes! Stuck between a rock and a hard place, Brian is faced with the temptation of having his own TV show, despite all the changes and has no choice but to do it the network's way. Everyone, especially Lois, is disappointed in Brian for what had happened, so Brian stands up for himself when CBS suggest ideas to make the show even more ridiculous and quits, effectively forcing the network to cancel the show.

The studios shown in "Brian Griffin's House of Payne" would appear to be set in or near Quahog, but the building is actually modeled after the real CBS studios located at 7800 Beverly Blvd. in Los Angeles.

The DVD cut of "And Then There Were Fewer" features a conversation between Seamus and Herbert regarding CBS being right for their generation.

Real Time with Bill Maher is filmed at a CBS studio in "Brian Writes a Bestseller".

Joe Swanson complains about Tomik and Bellgarde talking too loud at an adjoining booth at The Drunken Clam in "The Most Interesting Man in the World". After apologizing, Tomik jokes about having to have sex with each other since they can't find any women. Bellgarde is grossed out at first and then realizes he's been fooled and comments that Tomik should get a job as a comedy writer. Tomik confirms that he already has just such a gig at CBS on the show Wizard Robot and His Less Successful Friend, working with Bruce Helford.

In "Holly Bibble", CBS is billed as the 'loudest network on television' as the Griffins watch NCIS. The force from the volume causes nosebleeds and Peter to black out.

Retrieved from "https://familyguy.fandom.com/wiki/CBS?oldid=222428"
Community content is available under CC-BY-SA unless otherwise noted.