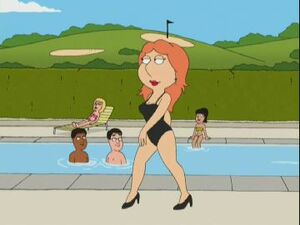 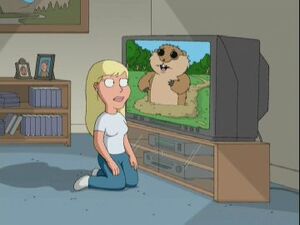 Rufus Griffin is mentioned as starring in Caddyblack, a blaxploitation version of Caddyshack in "If I'm Dyin', I'm Lyin'".

In "North by North Quahog", Brian is watching the kids while Lois and Peter are away. To stop Meg and Chris from fighting, Brian reads the novelization of Caddyshack to them, after finding out it's one of the few books Peter owns.

Peter “swam with the bulls” in "Brian Sings and Swings". They perform to “Waltz of the Flowers” from the ballet The Nutcracker by Tchaikovsky, which is a reference to the film.

Peter’s line, “So what? So let’s dance!” in "Peter's Two Dads" was also used by Rodney Dangerfield in Caddyshack.

"Meet the Quagmires" recalls a scene from the movie with Lois strutting poolside to the Kenny Loggins song "Mr. Night".

Stewie references the movie in his song "I've Got a Little List" in "Lois Kills Stewie".

Wil Wheaton and Patrick Stewart's exchange in "Not All Dogs Go To Heaven" at the McDonald's drive-thru is a directly from Caddyshack.

The scene in the warden's office with the lamp in "Three Kings" is taken from Caddyshack.

Knight appears as Judge Smails in archive footage from Caddyshack in It's A Trap!, expressing impatience with everyone's signals to attack Jabba the Hutt.

At the end of "Livin' on a Prayer", Lois gets Scotty's parents to treat their son's cancer and Peter says Rodney Dangerfield's quote "Hey everybody! We're all gonna get laid!" and the crowd cheers.

While hunting ghosts in "Hefty Shades of Gray", Peter insists on the guys watching Flatliners, but they switch to Caddyshack.

When Joe is teamed up with Kenny Loggins four games on a cruise ship in "Yacht Rocky", he admits he's not enamored of the song "Footloose". When Loggins offers up "I'm Alright" from Caddyshack, Joe insists that it is the gopher that sings that song.

The secondary focus group watching Meg eat an Arby's sandwich in "Disney's The Reboot" parodies a scene from Caddyshack in which Judge Smails' nephew Spaulding eats a booger while the caddies place wagers while watching in secret.

Retrieved from "https://familyguy.fandom.com/wiki/Caddyshack?oldid=219033"
Community content is available under CC-BY-SA unless otherwise noted.