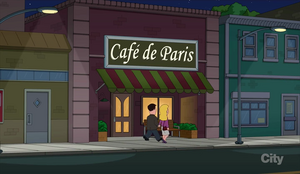 Café de Paris is where Cleveland and Jerome go out for a meal together in "Run, Chris, Run".

As they leave, Jerome notes that they have discovered that neither of the pair like crepes, with Cleveland noting that is another thing they have in common. He then goes on explain that the rest of the guys only think they hang out together because they are black, which Jerome notes is actually the truth, as he dislikes Cleveland's stories about working his remote control, Cleveland Brown, Jr. or how he once made a dog shake it's head "no."

Retrieved from "https://familyguy.fandom.com/wiki/Caf%C3%A9_de_Paris?oldid=197117"
Community content is available under CC-BY-SA unless otherwise noted.