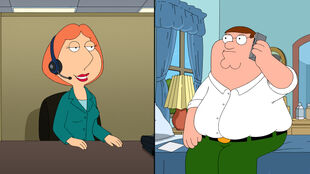 The voice on the other end sounds strangely familiar to Peter 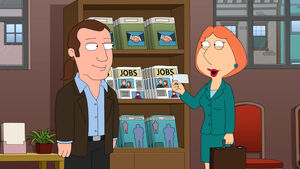 Chris enters with a birdhouse he built and Peter becomes interested in attracting birds. As the birds flock to the house, a falcon sweeps in and snatches all of the smaller birds. Peter decides to become a falconer and acquires a falcon named Xerxes, to everyone else's annoyance. As Peter sets off to take the falcon to the park, they spot a couple passing by on a motorcycle with a sidecar and Peter decides to upgrade his adventures. Later on, Peter is visited by a lawyer representing the Jewish motorcycle owner who sues him for Xerxes and everything he owned for stealing the motorcycle. 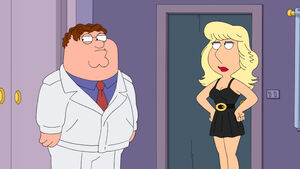 As Lois berates him for losing everything, she finds she is forced to get a job. Waiting at the employment agency, she is heard by a gentleman named Randy and offered voice work. Telling the family, she believes she will be appearing on television and in movies. But when she gets to the office, she finds it is a phone sex operation. Despite her reservations she is lured by the money and gives it a try. She finds herself answering calls for most of the men in town and returns home exhausted and not in the mood for sex. Peter complains to the guys about not having sex and Quagmire gives him the number for his favorite phone sex service. Alone at home, Peter calls the line and Lois answers, quickly figuring out that it is Peter. She entertains him as she also becomes attracted to her voice without being aware of who it is. Later, Lois asks about his day and tries to get some thoughts out of him about his experience. Peter calls later and asks about a date and Lois objects, noting that he is married despite Peter's insistence which angers Lois that Peter would actually cheat on her.

At The Drunken Clam, Peter tells the guys about meeting his phone sex date and the guys warn him against it. Peter wants to go through with it anyway. Lois tells Bonnie and she is horrified as well that Peter would cheat. Lois sees Peter dressed up to go out as he sticks to his story about going out of town, leaving Lois depressed and angry. She dresses herself up and meets Peter at the Quahog Motel where he confesses that he was faking about his fictional past and starts having regrets. He opens up and tells her she is beautiful, which almost makes Lois happy until he goes ahead and has sex with her, still unaware that she is Lois. Eight hours later, Peter finds out the truth and Lois is angry, but Peter admits that he somehow felt they were true soulmates and really did love her. They both admit their lovemaking was fantastic, although Peter also tells her that he ran up a phone bill of $7000 while calling the phone sex line. At home, they completely gross out the family with their show of affection for each other.

Retrieved from "https://familyguy.fandom.com/wiki/Call_Girl?oldid=198685"
Community content is available under CC-BY-SA unless otherwise noted.