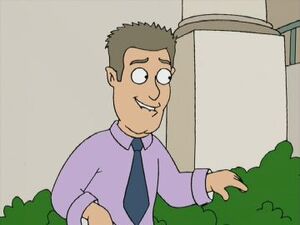 Calvin Richard Klein (born November 19, 1942) is an American fashion designer who launched the company that would later become Calvin Klein Inc. in 1968.

After injuring Guillermo in "A Hero Sits Next Door", Peter Griffin reveals he once worked for Klein, and, in fear of being fired from the Happy-Go-Lucky Toy Company does not want to go back working for him.

He appears in "A Picture's Worth a Thousand Bucks", when the family is in New York, they walk out and Klein approaches them. He says he must have Stewie Griffin to model for him. Stewie's father, Peter, asks who he is and Brian tells him, distinguishing him from other male fashion designers by his sexuality. Later Stewie appears on a huge outdoor advertisement screen to launch Klein's brand of Nappies.

Peter not recognizing Klein may be from bad memory or because he never actually met Klein while working for the company.

Peter used a bottle of Obsession made by Calvin Klein to make Cleveland Brown, Jr. golf for him in "Fore Father". When Peter shows the bottle to Paddy Tanniger, they both quote Klein's commercial.