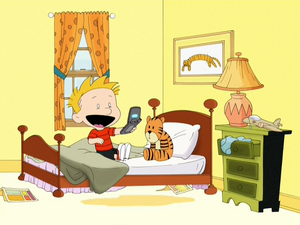 Calvin and Hobbes was a syndicated comic strip written and illustrated by Bill Watterson. It follows the humorous antics of Calvin, an imaginative six-year-old boy, and Hobbes, his energetic and sardonic stuffed tiger. The pair are named after John Calvin, a 16th-century French Reformation theologian, and Thomas Hobbes, a 17th-century English political philosopher. Set in the contemporary Midwestern United States in an unspecified suburban community, the broad themes of the strip deal with Calvin's flights of fantasy and his friendship with Hobbes, his misadventures, his unique views on a diverse range of political and cultural issues and his relationships with the people in his life, especially his parents. The dual nature of Hobbes is also a recurring motif: Calvin sees Hobbes as a live anthropomorphic tiger, while other characters see him as a stuffed animal.

Calvin and (stuffed) Hobbes appear as apparent friends of Stewie Griffin's in "Not All Dogs Go To Heaven". Calvin is voiced by Max Burkholder.

In "Brothers & Sisters", Peter packs toys and tuna to run away, recurring gag in Calvin and Hobbes.

Retrieved from "https://familyguy.fandom.com/wiki/Calvin_and_Hobbes?oldid=224101"
Community content is available under CC-BY-SA unless otherwise noted.