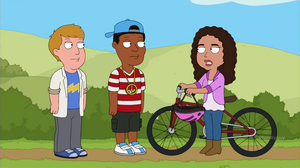 Cameron is a character in Parent Boppers with Dylan Flannigan on the Disney Channel as it films in Rhode Island in "Brian's a Bad Father".

After Brian gets Dylan to arrange to get him hired on the show as a writer, he begins making changes such as having Dylan threatening to kill himself in front of Cameron and another girl when they complain of having to wear bicycle helmets.

Retrieved from "https://familyguy.fandom.com/wiki/Cameron?oldid=187749"
Community content is available under CC-BY-SA unless otherwise noted.