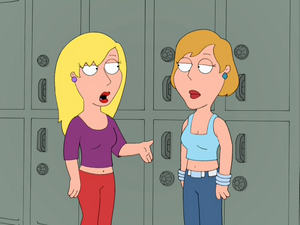 Camille Guaty is an American film and television actress. In 2005, Guaty had a recurring role as Maricruz Delgado, the girlfriend of Fernando Sucre, in FOX's Prison Break.

She is the voice of Connie DiMico's friend, Gina. She also voiced the Puerto Rican girl that Glenn Quagmire was dating in "The Man with Two Brians".

Retrieved from "https://familyguy.fandom.com/wiki/Camille_Guaty?oldid=188300"
Community content is available under CC-BY-SA unless otherwise noted.