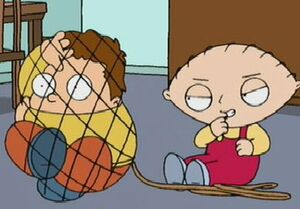 Camryn Manheim (born March 8, 1961) is an American actress known primarily for her roles as attorney Ellenor Frutt on ABC's The Practice and Delia Banks on CBS's Ghost Whisperer and as Elvis Presley's mother in the 2005 mini-series Elvis.

She provides the voice of Brad in "Dammit Janet!".

Fred Savage claimed Manheim is one of his personas in "FOX-y Lady".

Retrieved from "https://familyguy.fandom.com/wiki/Camryn_Manheim?oldid=204309"
Community content is available under CC-BY-SA unless otherwise noted.