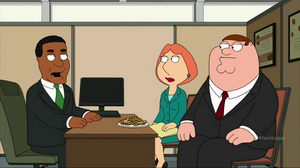 Carl Winston Lumbly (born August 14, 1951) is an American film, stage, and television actor. He is best known for his roles in Cagney & Lacey, Alias, and as the voice of the Martian Manhunter for the animated series Justice League and Justice League Unlimited.

Carl provides the voice of the loan officer in "Baking Bad".

Retrieved from "https://familyguy.fandom.com/wiki/Carl_Lumbly?oldid=172133"
Community content is available under CC-BY-SA unless otherwise noted.