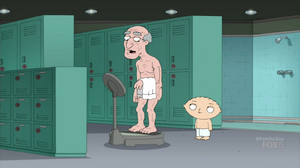 Carl Reiner (March 20, 1922 - June 29, 2020) was an American stand-up comedian, actor, director, producer, writer, and singer. He was also known for his work on Your Show of Shows, The Dick Van Dyke Show, the Oceans Trilogy, and in Father of the Pride.

Carl provides the voice of an old man in "An App a Day" and the coach in "Peter's Lost Youth".

Retrieved from "https://familyguy.fandom.com/wiki/Carl_Reiner?oldid=224340"
Community content is available under CC-BY-SA unless otherwise noted.