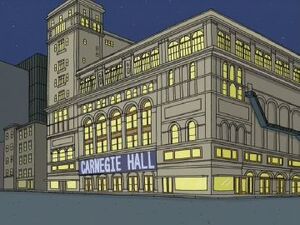 Designed by architect William Burnet Tuthill and built by philanthropist Andrew Carnegie in 1891, it is one of the most famous venues in the United States for classical music and popular music, renowned for its beauty, history and acoustics. Carnegie Hall has its own artistic programming, development, and marketing departments, and presents about 250 performances each season. It is also rented out to performing groups.

It was the site of Pearl Burton's failed attempt at 'serious' music when she sang the opera Carmen in "Brian Wallows and Peter's Swallows".

Meg visits several shopping malls with pun names in "Christmas is Coming" in search of a Santa Claus that gave her her first orgasm, including "Carnegie Mall."

Retrieved from "https://familyguy.fandom.com/wiki/Carnegie_Hall?oldid=217543"
Community content is available under CC-BY-SA unless otherwise noted.