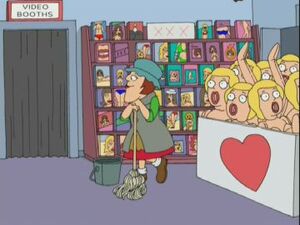 Carol Creighton Burnett (born April 26, 1933) is an American actress, comedienne, singer, dancer and writer. Burnett started her career in New York. After becoming a hit on Broadway, she debuted on television. After successful appearances on The Garry Moore Show, Burnett moved to Los Angeles and began an eleven-year run on the The Carol Burnett Show which was aired on CBS from 1967 to 1978. With roots in vaudeville, the show was a variety show, combining comedy sketches, song, and dance.

She is mentioned in "Don't Make Me Over" when Peter Griffin is beating up Jimmy Fallon about looking into the camera in every skit he's been in, claiming that Fallon hadn't earned what she's earned.

Retrieved from "https://familyguy.fandom.com/wiki/Carol_Burnett?oldid=121556"
Community content is available under CC-BY-SA unless otherwise noted.