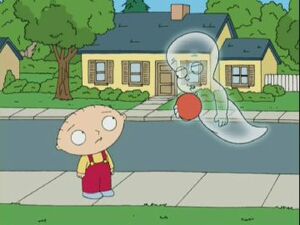 Casper the Friendly Ghost is the protagonist of the Famous Studios theatrical animated cartoon series of the same name. As his name indicates, he is a ghost, but is quite personable. According to the 1995 feature film Casper, his family name is McFadden.[1]

In "Stewie B. Goode", the first segment of Stewie Griffin: The Untold Story, Stewie Griffin reveals he caused Casper's death by a ball throw gone awry. Casper forgave him, because he was going to kill himself a few days later anyway.

Casper is voiced by Rory Thost.

Retrieved from "https://familyguy.fandom.com/wiki/Casper_the_Friendly_Ghost?oldid=172899"
Community content is available under CC-BY-SA unless otherwise noted.