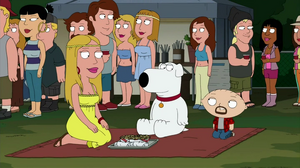 Cassandra is a girl that both Stewie and Brian hook up with at the Rhode Island Folk Festival in "This Little Piggy". When they discover that they both met the same girl, they try to ruin each other's chances with her, but discover she is game for a three-way. Back at her tent, She takes a snort of cocaine, but as she undresses, she collapses and dies of a drug overdose. Since she made Stewie aware that she had no friends or family, they take her body to a nearby cliff and dump it, where it lands on a pile of other bodies that were similarly dumped.

Retrieved from "https://familyguy.fandom.com/wiki/Cassandra?oldid=221507"
Community content is available under CC-BY-SA unless otherwise noted.