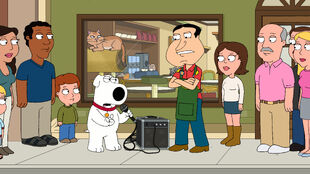 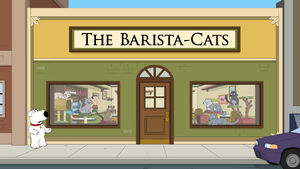 To fill a perceived need in town, Quagmire decides to open a cat cafe. However, he places it next to Brian's favorite bar, which causes friction between the two so Brian vows to shut it down. Making an argument that it's a health hazard, Brian actually succeeds in getting it shut down until the city council can rule on it. However, this backfires when Brian is no longer allowed in his favorite bar either.

Quagmire suddenly has to live with all of the cats from the cafe but find Peele prepared to take care of so many. To put an end to it snappishness, Stewie gets the idea to have Brian poses an emotional support animal so he can get into anywhere so long as they're together, but when they get into a spat, Stewie abandons him. Returning to home, he comes upon Quagmire burning the deceased bodies of his cats and they start to fight. But when Brian is struck by a passing bus, Quagmire stops to patch him up. as the chat, Quagmire admits he wanted to be known for something good instead of just being the town sex maniac. To cheer him up, Brian puts on his emotional support animal vest to go for a walk with him. 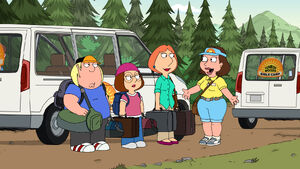 Things return to normal when the city council lift the ban on animals in public places, but Meg has fled the family to Japan where she is treated just as badly as before.

Retrieved from "https://familyguy.fandom.com/wiki/Cat_Fight?oldid=216024"
Community content is available under CC-BY-SA unless otherwise noted.