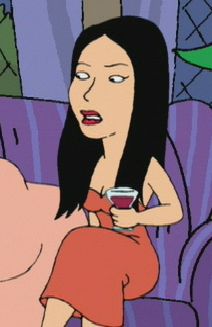 Catherine Zeta-Jones (born September 25, 1969) is a Welsh actress, currently based in the United States. She began her career on stage at an early age. After starring in a number of UK and US television films and small roles in films, she came to prominence with roles in Hollywood movies such as The Phantom, The Mask of Zorro, and Entrapment in the late 1990s. She won an Academy Award, BAFTA Award and a Screen Actors Guild Award and was nominated for a Golden Globe Award for portraying Velma Kelly in the 2002 film adaptation of Chicago. She is married to Michael Douglas.

She appears at a party trying to seduce Peter Griffin in "Family Guy Viewer Mail No. 1" segment "No Bones About It", using her husband as a reason.

Peter plays Michael Douglas' Munch Out in a video game store at the Quahog Mall in "The New Adventures of Old Tom", in which Michael simulates oral sex in a boxing setting. When Lois wants to leave, Peter claims he is unable to due to Catherine Zeta-Jones having her hands locked around the back of his head.

Retrieved from "https://familyguy.fandom.com/wiki/Catherine_Zeta-Jones?oldid=186717"
Community content is available under CC-BY-SA unless otherwise noted.