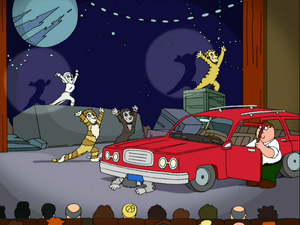 Cats is a musical composed by Andrew Lloyd Webber, based on Old Possum's Book of Practical Cats by T. S. Eliot. Cats first opened in the West End in 1981 and then on Broadway in 1982, each time directed by Trevor Nunn and choreographed by Gillian Lynne; it won numerous awards, including both the Laurence Olivier Award and the Tony Award for Best Musical. The London production ran for twenty one years and the Broadway production ran for eighteen years, both setting long-run records.

In "Brian Does Hollywood", Lois recalls a previous time when Peter disturbed a performance. During a performance of Cats, Peter crashes through a wall, running over one of the performers. He tries to explain that the "cat" just jumped in front of him and he never meant to hit it.

Grizabella, the 'Forgotten' cat in "Absolutely Babulous", is from Cats. She sings "Memory", one of the songs from the show.

Retrieved from "https://familyguy.fandom.com/wiki/Cats?oldid=218088"
Community content is available under CC-BY-SA unless otherwise noted.