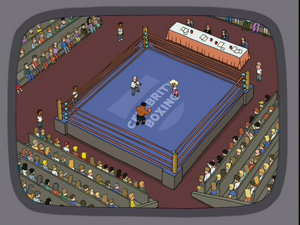 Celebrity Boxing was a FOX television show, in which celebrities whose careers and/or notoriety had diminished were pitted against each other in exhibition boxing matches. The contestants wore headgear during the fights, which were scheduled for three rounds apiece. Two episodes of the show were aired, both in the spring of 2002.

In "Patriot Games", Carol Channing participates in Celebrity Boxing with Mike Tyson. She wins by forfeit from Tyson after tiring him out. Her victory cost Brian Griffin $50 in a bet with Stewie.

Retrieved from "https://familyguy.fandom.com/wiki/Celebrity_Boxing?oldid=150541"
Community content is available under CC-BY-SA unless otherwise noted.