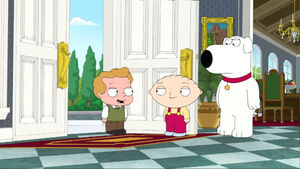 Chadley is a student at Corridors, an exclusive preschool that Lois decides to send Stewie to in "Take a Letter". Chadley notes that he has been kidnapped three times because of his family's money and had two older brother die from drug overdoses.

After a play date at Chadley's, Stewie is put on the spot to host one of his own, but worries about Chadley actually seeing the Griffin home. Stewie "borrows the mansion of a television pitchman while he's away to host the play date, and is convinced by Chadley to throw a party for the entire class. During the party, the owner comes home and everyone is forced to leave. Stewie tries to apologize for being poor but is told by Chadley that he is being ostracized, not because he is poor, but for lying and being poor. Stewie nearly gets to have some revenge when the home owner reveals that Chaley left his wallet behind, but his victory song convinces the owner that he isn't really Chadley.

Retrieved from "https://familyguy.fandom.com/wiki/Chadley?oldid=186339"
Community content is available under CC-BY-SA unless otherwise noted.