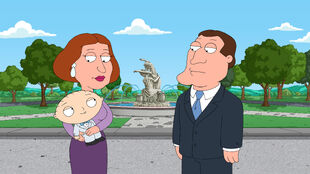 A new kind of "Cheerio"

Chap Stewie
Stewie alters his own birth and becomes British. 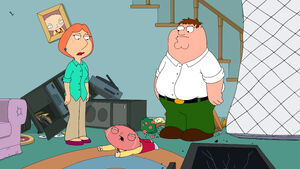 When he gets fed up with the family after their horseplay destroys the television while trying to watch his favorite show, Stewie reveals that he has built a new time machine and uses it to stop his conception. Going back three years into the past, he observes the events prior to his conception. Getting back to business, he discovers that Peter and Lois were truly in love but sets out to ruin things. Maxing out lois' credit cards to buy vibrators fails to work so he shaves Peter's hair to get them to argue but Lois flatters Peter and it fails to break them up. But he has success when he gives Peter's porn to Goodwill, and writes on the walls, setting them off at each other and erasing his original existence. 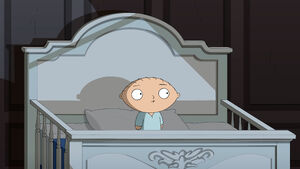 He is reborn into a rich British family. Things seem like fun at first, but his older brothers give him a hard time and he discovers they are not as foolish as his old family. He is dumped off to be raised by staff and realizes he misses his old family. His new father is a University of Oxford professor and he sets out to use the lab to build a new time machine. Piecing together a rudimentary machine, he is almost caught but gets away. He meets his past self and tells him about his bad alternate life and together they stop the fighting by reminding Peter and Lois of how much they love each other. They patch things up as Stewie says his goodbyes to his other self as a stage light from Peter's public access show falls on the British version. Returning to the original time line, he is happy to be back as Chris reveals that he has spent three years reading Peter's porn collection and a British family member avenges being wounded by Stewie in the past.