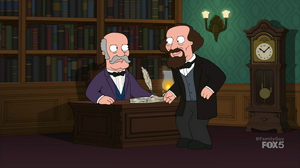 Several references to A Christmas Carol have been made, including "Screwed the Pooch" as Peter Griffin shouts at Bob Cratchit. In "Jesus, Mary & Joseph", the Griffins watch a version of A Christmas Carol where Scrooge stops to use the bathroom before accompanying the Ghost of Christmas Past

The basic plot of "Don't Be a Dickens At Christmas" is a parody of Dickens' A Christmas Carol.

When Joe feels betrayed by Peter in "Papa Has A Rollin' Son", he admits to Lois that it hurts like the dickens. In a cutaway, Charles Dickens delivers his latest book Oliver Nipple-Twist and proceeds to do just that to the recipient.

In "Short Cuts", Brian crosses author Charles Dickens for his character of his book, David Copperfield.

Retrieved from "https://familyguy.fandom.com/wiki/Charles_Dickens?oldid=219280"
Community content is available under CC-BY-SA unless otherwise noted.