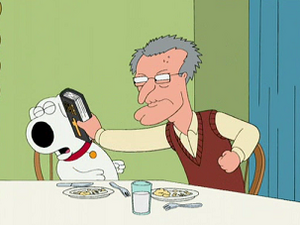 Charles Durning (February 28, 1923 - December 24, 2012) was an American actor. With appearances in over 100 films, Durning's memorable roles include police officers in the Oscar-winning The Sting and crime drama Dog Day Afternoon, along with the comedies Tootsie and The Best Little Whorehouse in Texas, the latter of which earned him an Academy Award nomination for best supporting actor. He won a Tony award for his portrayal of Big Daddy in Cat on a Hot Tin Roof.

He provided the voice for Francis Griffin, Peter's adoptive father, in various episodes of Family Guy. While the character died in "Peter's Two Dads", Francis still made further appearances as a ghost.

As Peter is dying in the future of "Rich Old Stewie", he sees others who have already passed on from the show, including Charles Durning.

Retrieved from "https://familyguy.fandom.com/wiki/Charles_Durning?oldid=219711"
Community content is available under CC-BY-SA unless otherwise noted.