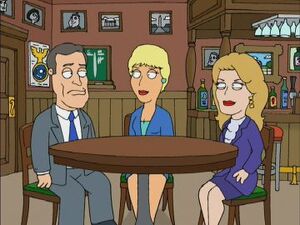 Charles Kimbrough (born May 23, 1936) is a character actor best known for playing the straight-faced anchor Jim Dial on Murphy Brown. In 1990, the role earned him a nomination for an Emmy Award for Outstanding Supporting Actor in a Comedy Series.

He reprised his role as Dial in a Murphy Brown parody in "A Picture's Worth a Thousand Bucks".

Retrieved from "https://familyguy.fandom.com/wiki/Charles_Kimbrough?oldid=162139"
Community content is available under CC-BY-SA unless otherwise noted.