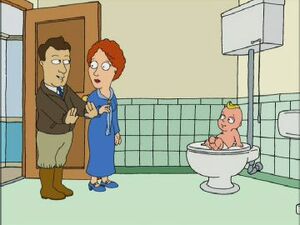 On May 20–21, 1927, Lindbergh, then a 25-year old U.S. Air Mail pilot, emerged from virtual obscurity to almost instantaneous world fame as the result of his Orteig Prize-winning solo non-stop flight from Roosevelt Field on Long Island to Le Bourget Field in Paris in the single-seat, single-engine monoplane Spirit of St. Louis.

On the evening of March 1, 1932, 20-month old Charles Augustus Lindbergh, Jr., was abducted by an intruder from his crib in the second story nursery of his family's rural home in East Amwell, New Jersey.

In "Brian in Love", the Lindberghs are potty training their son when he is accidentally flushed down the toilet. They plan to fake the kidnapping but are concerned over Amelia Earhart's witnessing the events.

Retrieved from "https://familyguy.fandom.com/wiki/Charles_Lindbergh?oldid=121581"
Community content is available under CC-BY-SA unless otherwise noted.