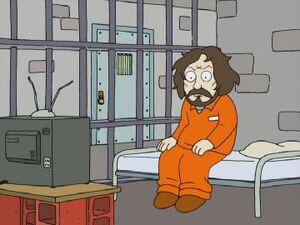 Charles Milles Manson (November 12, 1934 - November 19, 2017) was an American criminal who led what became known as the Manson Family, a quasi-commune that arose in California in the late 1960s. He was found guilty of conspiracy to commit the Tate/LaBianca murders carried out by members of the group at his instruction.

He appeared in "I Never Met the Dead Man" when Peter Griffin decides that television is evil. Griffin says he has been watching it in his cell all day long. In the ensuing cutaway, Manson says that if he hasn't seen it then it's new to him.

Peter talks about his California family in "Brian Does Hollywood", a cutaway shows him asking Charles Manson and his followers not to embarrass him at a party in the Hollywood Hills.

A non-animated headshot of Manson appears in "Road to the North Pole" as one of the voices in Meg Griffin's head during the musical number "All I Really Want For Christmas".

In "Foreign Affairs", a stoned Peter confides with a stoned Chris that they should go on a killing spree in the Hollywood Hills, a reference to Charles Manson and his followers killing of actress Sharon Tate and 6 others over a 2 day period in 1969.

Stewie Griffin mentions Charles Manson as having a twisted childhood while preparing to torture The Simpsons' Nelson Muntz in "The Simpsons Guy".

Chris listens to music by Charles Manson in "Hefty Shades of Gray".

Manson throws a frisbee that hits Jim Morrison, played by Peter Griffin, in "Rock Hard", and the latter tells him to kill Sharon Tate.