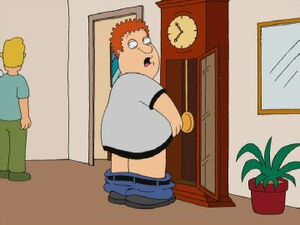 Charlie is a drunk at the stag party at Glenn Quagmire's house in "Death Has a Shadow" and the original Pilot Pitch. He was the leading scorer in Quagmire's drinking game. He is seen standing in front of a grandfather clock with his pants down.

He auditioned for Peter Griffin's The King and I at The Brine in "The King Is Dead".

Charlie is one of the guys that Brian and Stewie see at the stag party when they travel back to the past in "Back to the Pilot".

Retrieved from "https://familyguy.fandom.com/wiki/Charlie_(Death_Has_a_Shadow)?oldid=212530"
Community content is available under CC-BY-SA unless otherwise noted.