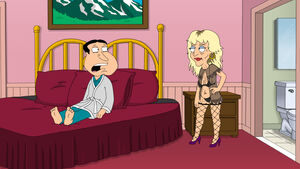 Quagmire approaches Peter with the idea and Peter agrees provided they have a date first which Glenn suffers through. Back at Quagmire's house, Charmisse insists they get on with the sex and the guys clumsily and reluctantly prepare. Just as they almost consummate their act, Charmisse calls off the charade, noting that it is obvious that they are straight but if Quagmire wants a divorce that badly she'll grant him one and appreciated Quagmire treating her decent.

Retrieved from "https://familyguy.fandom.com/wiki/Charmisse?oldid=199480"
Community content is available under CC-BY-SA unless otherwise noted.