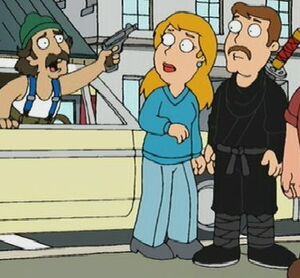 Richard Anthony "Cheech" Marin (born July 13, 1946) is an American comedian and actor who gained recognition as part of the comedy act Cheech & Chong during the 1970s and early 1980s, and as Don Johnson's partner, Insp. Joe Dominguez on Nash Bridges. He has also voiced characters in several Disney movies, including Oliver and Company, The Lion King, Cars and Cars 2. The thick Mexican accent he often uses is a part of a comic persona, rather than a natural accent.

In "Wasted Talent" he supposedly shoots Pawtucket Pat because his brother drank himself to death off Pat's crappy beer, Pawtucket Patriot Ale. It was then revealed seconds later that the shot was a joke. He was voiced by Carlos Alazraqui.

In "Padre de Familia", Peter Griffin calls Gerardo, a Mexican gardener for Carter Pewterschmidt, "Cheech" because he was too ignorant at the time to learn his name.

In "McStroke", an article was published in Mustache Aficionado in which the legitimacy of Marin's mustache is debated.

Retrieved from "https://familyguy.fandom.com/wiki/Cheech_Marin?oldid=218885"
Community content is available under CC-BY-SA unless otherwise noted.