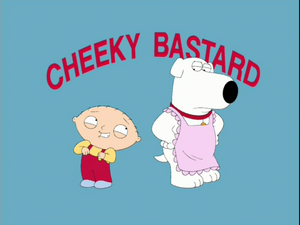 Cheeky Bastard was a fictional sitcom starring Stewie and Brian Griffin that aired on the now-defunct fictional PTV. It was filmed in front of a live studio audience. The show was canceled when the channel was shut down. The show featured Brian and Stewie in a setting similar to The Odd Couple of two opposite men living together.

Retrieved from "https://familyguy.fandom.com/wiki/Cheeky_Bastard?oldid=143715"
Community content is available under CC-BY-SA unless otherwise noted.