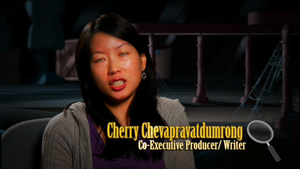 Cherry Chevapravatdumrong (pronounced "cheva-prava-DUM-wrong", also known as Cherry Cheva) is a Thai American author born in Columbus, OH, and currently serves as an executive story editor/co-executive producer on Family Guy. She is one of the few female writers, and an executive story editor, on the show. She also co-wrote the novelization of It Takes a Village Idiot, and I Married One with Alex Borstein.

She voiced the Thai women in Glenn Quagmire's car in "Airport '07".

In "Jesus, Mary & Joseph", Peter plays with her name in the credits, making it say "Chemotherapy vanguard vCr.".

Peter claims that the show's lawyer is Cherry in "Dead Dog Walking".

Peter also names Cherry as one one of the people who could go on Quagmire's camping trip other than himself in "No Giggity, No Doubt".

Retrieved from "https://familyguy.fandom.com/wiki/Cherry_Chevapravatdumrong?oldid=222468"
Community content is available under CC-BY-SA unless otherwise noted.