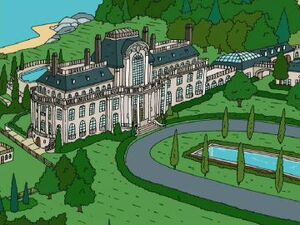 Cherrywood Manor is a very posh estate, that the Griffin Family inherited in "Peter, Peter, Caviar Eater" after Lois' Great Aunt Marguerite Pewterschmidt died while visiting them. They lived in it for a while until Peter ended up in a $100,000,000 debt with an auction house. After he mistakenly found out it was America's first presidential whorehouse while passing the house off as notable for other reasons, he sold the house to pay off his debts and moved back into his old house.

Retrieved from "https://familyguy.fandom.com/wiki/Cherrywood_Manor?oldid=206876"
Community content is available under CC-BY-SA unless otherwise noted.