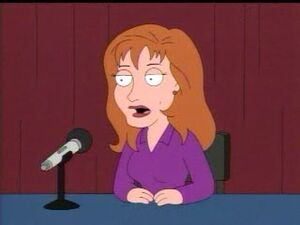 Cheryl Gates McFadden (born March 2, 1949), usually credited as Gates McFadden, is an American actress and choreographer. She is best known for portraying the character of Dr. Beverly Crusher in the Star Trek: The Next Generation television series and subsequent films.

She appears as herself in "Not All Dogs Go To Heaven" with her castmates because of that role. She answered questions at the convention and forcibly spent the day with Stewie Griffin afterwards.

Retrieved from "https://familyguy.fandom.com/wiki/Cheryl_Gates_McFadden?oldid=107251"
Community content is available under CC-BY-SA unless otherwise noted.