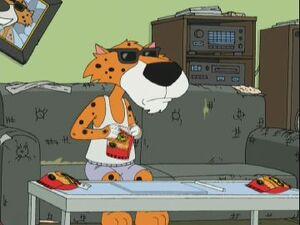 Chester Cheetah is a fictional character and the official mascot for Cheetos brand snacks and Chester's Puffcorn. According to an article in The New York Times, DDB Needham Worldwide is responsible for the creation of Chester. However, an episode of Unwrapped claims that the mascot was created by Hawley Pratt, the same man behind The Pink Panther.

In "Chick Cancer", Stewie Griffin mentions that he's as cool as a cheetah. Chester is then seen in a run-down apartment snorting Cheetos like cocaine while listening to "Tom Sawyer" by Canadian rock band Rush. He proclaims there is no better drummer than Neil Peart. He smashes his fist through a glass table. He is stabbed by the shattered glass, looks at his bloody hand and declares "it ain't easy being cheesy".

Retrieved from "https://familyguy.fandom.com/wiki/Chester_Cheetah?oldid=218975"
Community content is available under CC-BY-SA unless otherwise noted.