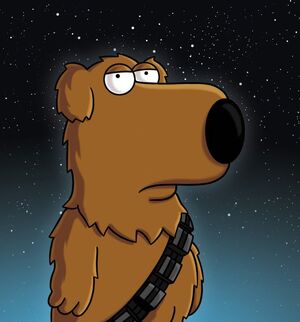 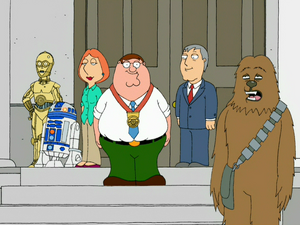 Chewbacca is a brown haired humanoid being and is one of the main characters in the Star Wars franchise. He is a Wookiee from the planet Kashyyyk, and serves as the co-pilot to the Millennium Falcon, along with his friend Han Solo.

In "Blind Ambition", Chewbacca appears at Peter Griffin's medal-awarding ceremony in a parody of A New Hope. He startled Mort Goldman.

Retrieved from "https://familyguy.fandom.com/wiki/Chewbacca?oldid=151190"
Community content is available under CC-BY-SA unless otherwise noted.