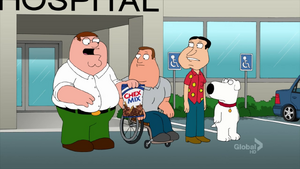 Chex Mix is a type of snack mix that includes Chex breakfast cereal sold by General Mills as a major component. The original version of Chex Mix is based on a homemade version of the snack which was made for many years but there are also several commercially produced varieties of Chex Mix. Though contents vary, the mixes generally include an assortment of Chex cereals, chips, hard breadsticks, pretzels, nuts or crackers. Recipes for homemade Chex mix are printed on Chex cereal boxes and are available online.

Peter Griffin decides to see if he and the guys really are the only ones left in Quahog when they lose their memories and awake in a hospital in "Forget-Me-Not" by opening a bag of Chex Mix. When no one else arrives, Peter concludes they are truly alone.

Retrieved from "https://familyguy.fandom.com/wiki/Chex_Mix?oldid=204808"
Community content is available under CC-BY-SA unless otherwise noted.