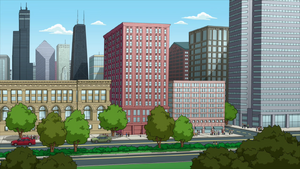 In "Stewie B. Goode", Stewie Griffin recalls the worst thing he's ever done was to encourage interference that resulted in Steve Bartman of the Chicago Cubs to miss a catch.

Peter travels to Chicago to be with his other family, The Handlemans, in "Back to the Woods".

In "The Tan Aquatic with Steve Zissou", Stewie decides to visit the Chicago Museum of Art before he thinks he'll die of cancer.

Peter takes Stella's place on a business trip to Chicago in "The Most Interesting Man in the World" where his sole purpose is to deliver a tube to Mr. Franks. Finding himself with a full day on his hands, Peter decides to take in some of Chicago's cultural attractions including the Art Institute of Chicago.

In "Short Cuts", Stewie mentions a relocation of Seinfeld to Chicago.

Retrieved from "https://familyguy.fandom.com/wiki/Chicago?oldid=219227"
Community content is available under CC-BY-SA unless otherwise noted.