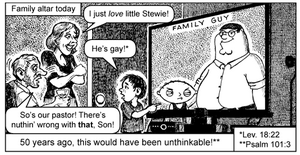 Chick tracts are short evangelical gospel comic strips with a religious theme, originally created and published by American publisher and religious cartoonist Jack Chick. Since his death, his company has continued to print new tracts using other authors.

Although many of Chick's tracts express views that are generally accepted Christian theology, several tracts have expressed controversial viewpoints. Most notably, Chick tracts were known for expressing strongly anti-Catholic views, as well as other non-protestant views.

In the Chick tract "Still No Revival", a family settles in to watch Family Guy, although the son points out that Stewie is gay. His family dismisses his concerns, noting that their own pastor is gay as well. The tract goes on to attack secularism, attempts to reach out to other religions and takes a particularly strong stance against Catholicism and Islam.

Retrieved from "https://familyguy.fandom.com/wiki/Chick_tract?oldid=201515"
Community content is available under CC-BY-SA unless otherwise noted.