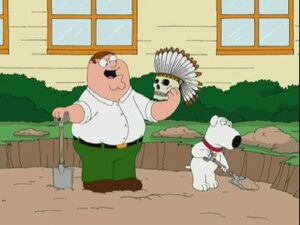 Chief Diamond Phillips was the name Peter Griffin gave the Deceased Indian Chief's skull he found in "Petergeist" after actor Lou Diamond Phillips. After using it for several disruptive activities, the skull unleashed a curse which led Peter to dump it in the garbage can. Later, while looking for it, the Griffins found out that it came into the hands of Carrot Top, who had given the skull the same name. After getting it back and burying it, the curse goes away.

Retrieved from "https://familyguy.fandom.com/wiki/Chief_Diamond_Phillips?oldid=224760"
Community content is available under CC-BY-SA unless otherwise noted.