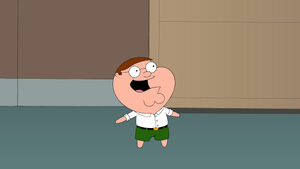 Chip is the vestigial twin Peter discovers growing out of his neck in "Vestigial Peter".

When Lois tries to get Peter ready for church, she complains that he keeps wearing the same old shirt and insists that he go to the mall afterward to get new clothes. Trying on a new shirt, the salesman points out a lump on Peter's neck and Lois insists on seeing Dr. Hartman. The doctor identifies it as a twin and extracts it from just beneath Peter's skin. Taking it home, he frightens the kids at first but soon gets everyone to warm up to him. But when Chip wants to live an active life, Peter tries to get him to slow down and Lois objects to him trying to stifle Chip.

Peter goes back to Dr. Hartman and requests to have Chip removed despite possible risks to his own life. The operation is a success and they become separate entities. Despite Peter's attempt to encourage Chip to go his own way, the family insists Chip stay with them. Chip endears him to the family further when he rearranges the home and spends time with the family. Peter decides to get rid of him and tries to have him eaten by a dingo. While the attempt fails, Chip realizes he isn't wanted and leaves. Peter breaks the news to the family and they go search for Chip, leaving Peter alone. Going to the basement, Peter falls down the stairs and breaks his leg. Chip returns and finds Peter, making a splint for his leg and drags him back upstairs. Peter is grateful for what Chip did and makes up with him. Chip decides to go out in the world and experience it for himself, sailing himself aloft on a balloon where he became the kid on ABC's The Middle.

Chip is voiced by Seth MacFarlane.

Chip appears in a group of characters voiced by Seth MacFarlane in "Customer of the Week". Interestingly, he emerges from Peter's neck despite being last seen as fully autonomous.