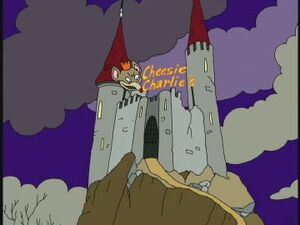 Lois has booked Cheesie Charlie's for Stewie's upcoming first birthday party and sends Peter along with Chris to drop off the deposit check at the restaurant. However, once they arrive, Peter sports an attitude that causes the manager to give their reservation to someone else, a move Peter later realizes will infuriate Lois. Meanwhile, Stewie misinterprets the meaning of his birthday and assumes that the same mysterious "Man in White" who delivered him as an infant will be returning to force Stewie back into Lois' womb from which he escaped just one year ago. Meg cries all the way home to Peter from cheerleading practice, and has been having trouble fitting in at school. Later, she discovers a new friend named Jennifer. 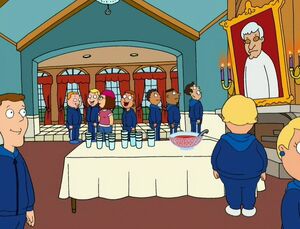 Retrieved from "https://familyguy.fandom.com/wiki/Chitty_Chitty_Death_Bang?oldid=202761"
Community content is available under CC-BY-SA unless otherwise noted.