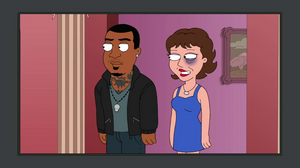 In 2008, Brown's musical setbacks were partially attributed to a domestic assault. At around 12:30am on February 8, 2009, Brown and his girlfriend and fellow R&B singer Rihanna had an argument which escalated into physical violence, leaving Rihanna with visual facial injuries which required hospitalization. Brown turned himself in to the Los Angeles Police Department's Wilshire station at 6:30pm and was booked under suspicion of making criminal threats. On August 25, Brown was sentenced to five years of probation, one year of domestic violence counseling, and six months of community service; the judge retained a five-year restraining order on Brown, which requires him to remain 50 yards away from Rihanna, 10 yards at public events.

Peter exchanges trash talk with Ross Fishman during their climb of Mount Everest in "Into Fat Air", telling him that he'll beat him so bad he'll think he gave Chris Brown an STD.

When The Drunken Clam is closed following the death of Horace in "Save the Clam", the guys are stuck at Peter's house drinking and watching Joanie Loves Chris Brown on television. As Joanie and Chris arrive at a party, a guest offers them some punch but Joanie declines, noting that she already had some in the car.

In an attempt to draw a parallel between the pair to prove that Cleveland Brown, Jr. is a thug in "A Shot in the Dark", Carter Pewterschmidt's lawyer points out that Jr. and Chris Brown have the same last name.

Chris is listed as a celebrity that went on to be successful despite exposing themselves in "An App a Day".

The song that plays when Quagmire meets various women from Tinder in "The Dating Game" is "Fun" by Pitbull and Chris Brown.

When Peter decides to live as a woman after being mistaken for transgender in "Trans-Fat", he compliments Chris Brown on his music, but is knocked into an elevator where he is joined by Ray Rice.

Retrieved from "https://familyguy.fandom.com/wiki/Chris_Brown?oldid=220635"
Community content is available under CC-BY-SA unless otherwise noted.