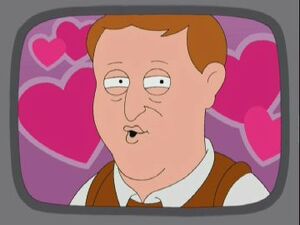 Christopher Joseph "Chris" Burke is an American actor with Down's Syndrome, best known for his character Charles "Corky" Thatcher on the television series, Life Goes On.

He or his character, Corky, appears in "Believe It or Not, Joe's Walking on Air" for a dating show called Who Wants to Date Corky? from Life Goes On.

Retrieved from "https://familyguy.fandom.com/wiki/Chris_Burke?oldid=199650"
Community content is available under CC-BY-SA unless otherwise noted.