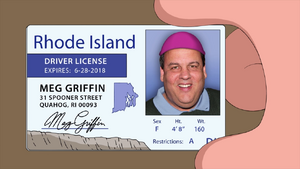 Christopher James Christie (born September 6, 1962) is an American politician, lobbyist, and attorney. He is a member of the Republican Party and served as the 55th Governor of New Jersey.

Christie's image altered with her pink hat serves as Meg's fake ID in "Crimes and Meg's Demeanor", which Peter observes is a good likeness.

Meg is repeatedly mistaken for Christie in "Trump Guy".

A running gag in "La Famiglia Guy" involves predictions reportedly made in February of 2019, including Donald Trump's suicide in prison, Chris Christie losing weight, Mike Pence coming out of the closet before hanging himself in prison and Melania Trump being deported to Slovenia and hanging herself in prison.

Retrieved from "https://familyguy.fandom.com/wiki/Chris_Christie?oldid=227920"
Community content is available under CC-BY-SA unless otherwise noted.