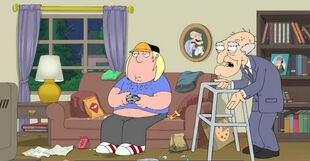 Chris Cross
Chris leaves home to move in with Herbert. 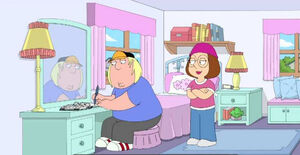 When Chris gets teased at school for his no-name sneakers, he tries to ask for money but is turned down. Passing by Lois and Peter's room while they are out for the night, he spots Peter's wallet but finds it has no money. When he turns, he spots Lois' purse with money and decides to take it, although he is spotted by Meg. Meg confronts him and demands that he do as she asks or she will tell their parents. Chris goes along at first but when he finds out that Meg never intends to let up on the demands, he decides to run away to Herbert's house. Meg is forced to try to hide that Chris ran away while Herbert finds that life with Chris isn't all that he fantasized about. When Chris finally pushes things too far by making a mess and refusing to get ready for a night out, Herbert finally kicks him out. Chris exits to find Meg looking for him. She apologizes and admits she missed him and Chris admits that they need each other to cope in the family. Herbert watches as they hug and drives away to cry about their break up to some friends. 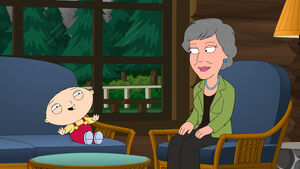 Meanwhile, on the way home from a bad birthday party for a “friend” Lois met, she puts on music to soothe a cranky Stewie and he is captivated by the sound of Anne Murray. Listening later in his room, Brian insults him but Stewie convinces him to give it a try and he is won over also after Stewie sings “You Needed Me”. While listening to “Snowbird”, they disagree over the meaning of the lyrics and set out to find her to have her explain the song's true meaning. Traveling to Canada to see her, she gives them both credit along with her own explanation but after Brian heads to use the restroom, Anne admits to Stewie that they should have really consulted the song writer. Taken aback, Stewie ties up Anne and holds her at gunpoint while pronouncing her a fraud despite Brian's assurance that it is standard industry practice. Still angry, Stewie forces Anne to sing “Snowbird” while gagged.

Retrieved from "https://familyguy.fandom.com/wiki/Chris_Cross?oldid=202437"
Community content is available under CC-BY-SA unless otherwise noted.